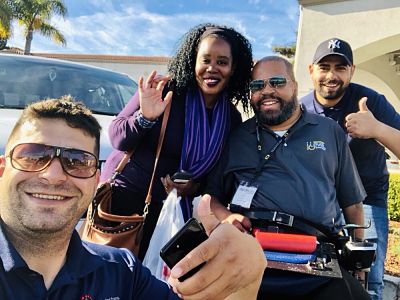 Connecting San Francisco with Marin County and other districts further north, the Golden Gate Bridge was, at one time, designated the greatest man-made sight in the United States by the U.S. Travel Service. Opened on May 28th, 1937, the bridge took four years to build and at the time of its completion, was the longest suspension bridge in the world, measuring approximately two miles in length.

Alcatraz penitentiary, located on Alcatraz Island in San Francisco Bay, is one of America’s most infamous prisons. It operated for almost thirty years, closing in 1963 and re-opening as a tourist attraction in 1973. Some of America’s most well-known criminals were inmates here, including Al Capone and the “Birdman,” who would later form the basis for the fictional movie The Birdman of Alcatraz

One of San Francisco’s most popular tourist areas is Fisherman’s Wharf. If this is your first visit to the city and you only have a day or two to see the sights, Fisherman’s Wharf is a good place to start. This old section, once the Little Italy of San Francisco, is an area known for its shops, restaurants, and beautiful setting along the waterfront. It’s a fun place to stroll around and get a taste for the city. From here, you can also take a sightseeing cruise for spectacular views of the city, or organize a fishing charter.

In Golden Gate Park, the de Young Museum is a fine arts museum, and one of the largest public art institutions in San Francisco. Exhibits cover a variety of time frames and geographical locations. While art and period interiors from North America feature strongly in the collection

These two unique and uninhabited hills, more than 900 feet high, are not in fact the highest of San Francisco’s 43 hills, a distinction belonging to Mount Davidson, which is 33 feet higher. They do have one of the finest views out over the city and bay, they’re undeveloped, and they’re easy to access. You can drive to the north peak parking area for fine views and hike along trails over the north and south peaks.

The Twin Peaks are the only hills in San Francisco not to have been built over and remain in their original state. The Spaniards called them “Los pechos de la Chola” or the Breasts of the Indian Maiden. Even on warm days, strong, cool breezes blow in from the Pacific, especially in the late afternoon.

The Palace of Fine Arts in San Francisco is the last remaining structure from the 1915 Panama Pacific Exposition. Listed on the National Register of Historic Places, this classical looking building is beautifully situated on a lagoon that reflects the mirror image on the surface of the calm water, while ducks and geese drift by. The palace has been restored, along with the grounds, and today hosts art exhibitions and performances. The Palace of Fine Arts Theatre seats approximately 1,000 patrons.

Ghirardelli Square is in a restored factory area, surrounded by shops, galleries, and restaurants in renovated industrial buildings. The square was inaugurated in 1964 and was the first of a number of projects designed to give new life to abandoned factory complexes. Ghirardelli’s old red-brick chocolate factory has been turned into a centre for shoppers, art-lovers, and those in search of entertainment or a good meal. Its belfry (built-in 1916) is modelled on that of the Château of Blois in France. Later additions are rose gardens decorated with fountains and terraces with fine views.